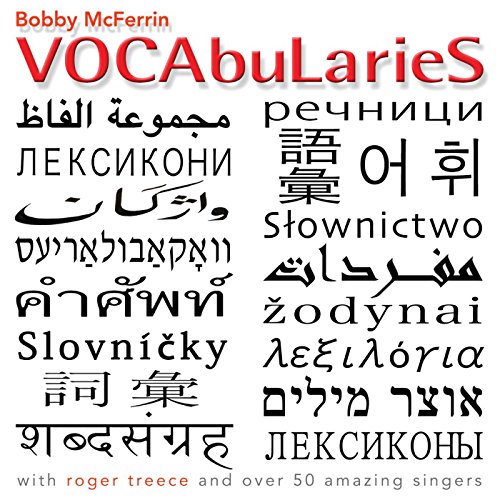 “a veritable symphony of voices” – People Magazine (3.5 of 4 stars)

“the most extraordinary music Bobby McFerrin has ever made” – Jeff Simon, The Buffalo News

VOCAbuLarieS is Bobby McFerrin music for the 21st century. It is unlike anything the 10-time Grammy-winner has ever recorded. An ambitious project several years in the making, it draws from the array of influences that have long contributed to McFerrin’­s innovative style — classical to world music, R&B to gospel and beyond – and recasts the world-renowned singer in a new framework defined by dense compositional detail, rich textures and complex arrangements. VOCAbuLarieS builds upon McFerrin’­s past explorations and journeys into expansive territory. Constructed as meticulously as a Mozart symphony or a Steely Dan album, intricately synthesized from countless stylistic elements, VOCAbuLarieS may be unlike any album anyone has ever recorded.

VOCAbuLarieS was imagined by McFerrin’­s longtime manager and producer, Linda Goldstein. “There was Bobby, conducting the Vienna Philharmonic, experimenting with multi-track recording, touring with his twelve voice improvising ensemble Voicestra, and performing his adventurous, pioneering solo show,” says Goldstein, “and I wanted to find an intersection of these pathways.” She envisioned a new kind of vocal ensemble music using extended compositional forms. Bobby’s inventive articulation, timbre, and phrasing would serve as a template, allowing singers to break free of choral conventions. “I was trying to harness the way Bobby takes ideas, sounds from all over the world and alchemizes them into a new language.”

To begin this experiment, Linda recruited Roger Treece, a classically trained composer/arranger and vocalist. Roger and Linda listened to hundreds of hours of Bobby’s wildly diverse archival recordings, searching for the finest threads of ideas. Over the seven years of writing, recording and editing VOCAbuLarieS, Treece “got a triple Ph.D. in Bobby McFerrinisms,” says Goldstein.

Treece found starting places for his compositions in the most interesting motifs from those recordings, and in classic songs from Bobby’s catalogue. “I set out to construct each piece with lots of twists and turns and modulations, like a page-turner or a movie that keeps you on the edge of your seat,” says Treece, “but I also wanted to stay true to the loose, easy feel of Bobby’­s singing, the joyful quality. What emerged was through-composed music that’­s got groove.”

“It’­s a very different project for me,” says McFerrin. “I’­ve never worked so closely with another writer who could create around what I do. As an improviser, everything exists only in the moment, and then you let go of it. But in this context, Roger would hear something I did once, write it down and build the material into a fully scored theme and variations form, and then say, “Here, sing this.” It was old and new, mine and not mine. It was a challenge for me.”

Bobby and Roger enlisted members of Voicestra and fine vocalists from the worlds of jazz, opera, performance art, early music, cabaret, and rock and roll. Roger spent years in the studio recording Bobby and Grammy-winning recording artists like R&B singer Lisa Fischer, Brazilian jazz innovator Luciana Souza, Janis Siegel of the Manhattan Transfer, and the stellar ensemble singers of New York Voices, editing and re-editing to design the right sound. The singers were recorded one at a time and in small groups to create a virtual choir made up of over 1,400 vocal tracks. Over the course of many years and over a thousand hours of studio time, the best performances were captured and sculpted into form. “The music emerged elegantly from the meticulous craftsmanship of Roger’­s surgical recording and editing process,” says Goldstein. “Voices of different colors, types, and stylistic bents were joined to invent a new sound, inspired by Bobby McFerrin. The technique allowed us to combine studio R&B sound, classical choral blend, and African tribal chant. We melded them into a new amalgam, built up layer by layer.” The final mix required over 100 gigs of audio memory to house the enormity of the musical material: intricate, overwhelming, and yet vividly joyous.

The seven songs that make up VOCAbuLarieS “keep the listener’­s ear in a constant state of surprise,” says Roger Treece. Each song unfolds a kaleidoscopic perspective on Bobby’­s irresistible vocal riffs. The lyrics offer a collage of Latin, Italian, Sanskrit, Zulu, Spanish, Russian, Hebrew, Portuguese, Mandarin, Japanese, French, Arabic, German, English, Gaelic as well as Bobby’­s own invented language. In the song Ladeo, McFerrin sums up his musical philosophy. “Time for taking words away,” he sings, “the melody will tell the story as we go along.”

From the opening cry of Baby through the final notes of Brief Eternity, McFerrin, Treece and their virtual choir transport us to uncharted ground. It’s like arriving in an unfamiliar city that feels like home. This is a universal music that works on many levels. Every listener will hear something different in VOCAbuLarieS. “One song becomes a thousand songs,” Bobby sings. Within the seven songs of VOCAbuLarieS are many thousands of songs, each one a moving, wondrous, enveloping creation brimming with ecstasy, uplift and a sense of infinite possibility.

Are you sure you want to delete your Profile?

This will remove all of your posts, saved information and delete your account.

This cannot be undone.